skip to main | skip to sidebar

The story of the white elephant 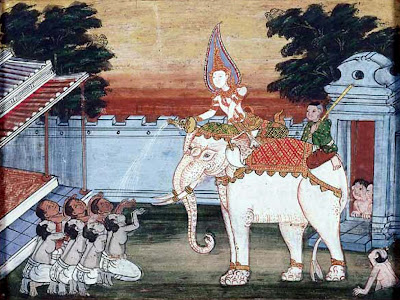 Some people in my class asked me to blog about the story behind the phrase "white elephant." I will try my best- here it is, to the best of my understanding, as told to me by friends in Thailand! I have checked this story out on the internet as well to make sure that it's reasonably accurate.

Background information- "white elephant" is a term commonly used in English to describe a useless gift. It is a gift that you don't really want. We sometimes have "white elephant" sales as well, which are like garage sales, where people sell all the things they don't want anymore.
The Story-

One legend associated with Buddha says that the night before his mother gave birth to him, she dreamed of a white (albino) elephant giving her a pure lotus flower. Thus, white elephants have historically been considered sacred in Thailand (which used to be called Siam). All white elephants were therefore the property of the King of Siam.

That is how the phrase "white elephant" came to mean "an unwanted gift." 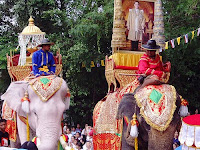 Here is a link to a video of sacred white elephants in a religious parade in Thailand. They are carrying gold Buddha statues. 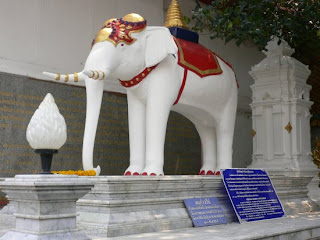 Vocabulary Practice- fill in the blanks with the vocabulary words

Once, there was a colony of ants. The queen ant told all the workers to go find food. However, one worker ant decided that he would rather go bowling! When the queen ant found out, she called the worker ant. "I am very _____________ with you," she said. "You have _____________ me! Now you must leave our colony and go into exile." The _____________ worker ant left the colony and wandered around outside. Soon, he felt very hungry. It started to rain, but he had no hole to hide in. He felt very sad. "I am cold, wet, and hungry. I'm ____________ by everyone in my colony, and I have the __________ of my queen. What should I do?" he thought to himself. Suddenly, he saw a river of water rushing towards the anthill! "Oh, no! I have to save my colony!" he exclaimed. He ran to some other ants to get help. When they saw the water, they all got together and pulled a piece of wood across the path of the rushing water. The wood diverted the water away from the anthill. The worker ant was a hero! The queen let him come home, and he always did his share of the work after that.

There are many ways to use the modal verb (auxiliary verb) would.

1. Use it in a conditional statement with the word if, to describe an imaginary situation:
If I had a lot of money, I would travel the world.
I would travel to Europe if I could affort to.

2. Use it without if to describe a hypothetical or imaginary thought:
I would never eat a rat!

3. Use it to refer to repeated actions or states in the past tense. (Would is only used for this when the time period is clearly established.) This is how I used would in my blog today.

Grammar Practice- read the following sentences. Decide how the modal verb would is used in each sentence- is it #1, #2, or #3 (see above)?

1. I would visit Italy this summer if I had the time.
2. When I was in first grade, I would often suck my thumb.
3. I would love to be an astronaut!
4. I would never go skydiving.
5. If I could fly, I would be a superhero.
6. My sister would often tell me what do to while we were growing up.